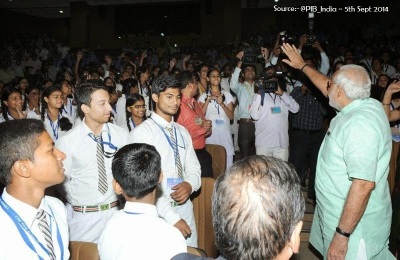 Critics have not failed to criticize and politicize the Prime Minister’s initiative (a first of this kind) to speak to Students across the nation ~ possibly also because some Media brought in politicians to speak about this issue rather than ask the Students….
Whilst I believe that execution could have been done slightly better and translators organized so that every child could understand throughout the nation, it was no less a mammoth task that was accomplished and I must salute Prime Minster Narendra Modi, the HRD Ministry & Minister Smriti Irani to put it together and also think of taking up this initiative.
So what are the Criticisms? That:-
The program started off with Children taking about Dr Radhakrishnan and many who didn’t know about him or reason why Teacher’s Day was celebrated got to know about him.
The reason that we celebrate Teachers Day is to respect & admire our Teachers and the effort that they put in to build our lives – the PM’s address focused on exactly that – and to bring back the respect of the Teacher’s position that has been lost somewhere. If those who say that he is not speaking about the issues teachers face – he did touch upon issue of lack of teachers, sanitation etc. but what he was trying to do, according to me, is bring about a social reform and change. And in that he has succeeded, the number of interviews and blogs I have read from the Students themselves are testimony to the fact that he has brought about a thought in the minds to Children in terms of respecting their teacher, in terms of choosing their profession or even if not becoming a teacher but to teach one class a week, whatever they become, are substantial steps in addressing Teacher’s issues.
Those who said Teachers were ignored and education system should have been the focus have completely missed the point and perhaps that is why the Prime Minister is Narendra Modi and not them.  Infrastructure and Development have been the Prime Minister’s agenda and he has spoken about them before and if he had addressed those then the very Critics would have said he is being repetitive. The PM address has focused on the  future and changing the mindset of School Children with regards to their education, their future, their surrounding and their teachers and which he achieved to a large extent
I think the Prime Minister has clearly laid out the vision of a Digital India and has also alluded to the fact that this was a test to see how far the reach is of Digitalization in India today. Perhaps that is why there are some who just “Speak” and there are some who “Act” to deliver. As an Administrator PM Modi’s track record speaks for itself and I am buoyant with hope that we shall soon see changes in the Education System in India.
I am afraid that the Critics having run out of Criticisms have latched on to the words rather than the tone when he was saying it – the preparation of 2024 elections comment was accompanied with a laugh and the fact that Teachers profession is a last choice wasn’t a disrespect of teachers but rather he was lamenting the fact that so few people opt to choose that profession and he was trying to bring about a change in thought towards that profession.
Perhaps it is time that instead of sitting in studios and criticizing (mainly just for the sake of it); we all take a step and act to help bring the change about. Some things are beyond politicizing – National security & pride, Education, Climate, Safety & Respect of all, development – there is so much to focus and work on.

This site uses Akismet to reduce spam. Learn how your comment data is processed.